Freezing the soup - this is how it works 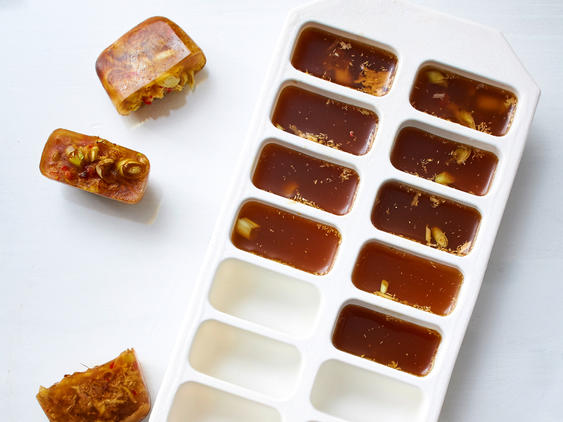 A hot soup on cold days makes you happy and warms you from within! If you have cooked too much, you can freeze the rest of the soup - so you always have a quick and healthy lunch ready. If you follow our tips and tricks, there's nothing to stop you enjoying your soup in stock!

From now on it's called: bagged soup? No, thanks! Because home-made soup simply tastes best. Whether it's a cold, homesickness or a simple stomach growl, when hunger strikes, soup is often the right thing. If you're cooking on stock or freezing the leftover food, you don't need to stand in the kitchen for long - just defrost it, warm it up, done!

Freezing soup - does it even taste good?
Whether soup tastes just as good after freezing as freshly cooked is purely a matter of taste. Some people hardly taste any difference, while others prefer freshly cooked soup, and yet others find frozen soup even better than fresh. How much the taste can vary also depends on the type of soup you want to freeze.

Which soups can be frozen well?
Soups that consist of pureed vegetables, such as pureed pea soup, pumpkin soup or tomato soup, are particularly good for freezing. Consistency and taste are well preserved. However, it is best to prepare it without cream or crème fraîche, because this will flocculate after defrosting - the soup will no longer look appetizing. Instead, simply add the cream after defrosting.

You can also freeze soup with clear broth and meat, for example chicken soup. However, the ice crystals dilute the stock a bit, so you may have to add more seasoning after defrosting.

You should keep this in mind when freezing the soup
Soup side dishes containing starch, such as noodles, diced potatoes or rice, should not be frozen, but should always be added fresh. These ingredients become very soft and mushy when defrosted.

Special care should be taken with potatoes - they not only become mushy after defrosting, but also develop an unpleasantly sweet aftertaste due to the freezing process. It is therefore better not to freeze them.
Do not freeze too much soup at once, otherwise defrosting will take quite a long time. It is better to freeze small portions of soup, but several individual portions.

Tip: Use ice cube forms - the small compartments are good for portioning!
Be sure to let the soup cool down completely before freezing it! If the soup is still too warm, this not only consumes unnecessary energy, but also raises the temperature in your freezer and soon after that you will need to defrost the fridge.

Only fill the containers to about two thirds of their capacity. Liquids expand when they freeze. So if the soup does not have enough space in the freezer, the container can burst. A big mess in the fridge is the result!

Freezing soup in a freezer bag
An ordinary freezer bag is the most effective way to freeze soup. Because they are so flexible, you can store them in the freezer to save space. Freezing, however, also requires some skill, because often it is not possible to freeze soup without spilling.

Here's a simple trick: before decanting the soup, place the empty freezer bag in a simple plastic box so that the bag doesn't slip away during decanting. Now pour in the soup, leaving about a third of the space in the bag. Close the bag and take it out of the plastic box. Now you can easily put the soup into the freezer. You can also leave the well closed bags in the plastic box, freeze them and remove the box after about two hours - this way you get frozen blocks of soup.

Freezing soup in a jar
Some people find preserving jars unsuitable for freezing soup in. We believe that they are very suitable - the only thing that matters is not to make the jars too full so that they do not burst in the freezer. Also, use wide rather than tall and narrow glasses, so that the liquid can expand even more. Let the soup cool down well before decanting. Then fill into the glasses and close them well.

Freezing the soup in the plastic box
You can also freeze soup in frost-resistant plastic boxes. They offer plenty of space for large quantities of soup and are also easy to stack. Use wide instead of high and narrow boxes, so the liquid can expand better. Let the soup cool down well before decanting. Then pour it into the glasses, leave some space and close them well.